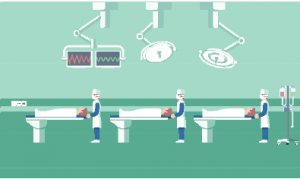 How should you handle this?

This fictional scenario was one of several considered by a panel of medical administrators. Panelists stressed the need for administrators to use patience and tact, but also firmness when necessary, in dealing with delicate circumstances involving potentially unethical behavior by surgeons.

In the case of overlapping surgeries, a discussion presented by moderator Gerald Healy, MD, past president of the Triological Society and the American College of Surgeons, panelists acknowledged that the practice is hardly uncommon but tended to agree that patient consent was the most important issue.

Michael Stewart, MD, chairman of otolaryngology at Weill Cornell Medical College in New York City, said it is important to obtain input from all sides before coming to any conclusions about a specific case; however, if the scenario were true, your first step should be to look to your own policies to see whether there have been any violations, and you might consider implementing policies if none exist.

No physician, no matter how senior, should be above the rules. “The rules and standards still have to apply, and it’s your job to implement those,” he said. Taking the step of suspending a physician might be drastic, given the long-lasting career effects, but that concern has to be balanced against the risk of patient harm.

Kenneth Grundfast, MD, chief of otolaryngology-head and neck surgery at Boston Medical Center, said that a good safety history is no excuse for not acting appropriately. “Because you haven’t had any complications doesn’t mean tomorrow there’s not going to be a horrible complication,” he added.

Educational considerations also require balance, said Carol Bradford, MD, chair of otolaryngology-head and neck surgery at the University of Michigan in Ann Arbor. “It’s not clear to me that the fellow is learning in the absence of any supervision,” she said. “I do think supervision in education requires an interaction in the operating room.”

Nevertheless, some autonomy is probably important, she added. “I’m not endorsing ethical violations to the patients and families, but I do worry about the consequence of never acting independently as a trainee and then suddenly, on day one in practice, you’re alone.” The best philosophy might be a “graduated autonomy and appropriate supervision,” she said.

Michael Benninger, MD, chairman of the Head and Neck Institute at the Cleveland Clinic, said, “Healthcare environments should be environments of people being able to raise concerns without retribution, and they should be comfortable exposing potential problems.”

In the urology literature, those running simultaneous operations actually have been found to have the better outcomes, he said, although the question of which portions of the procedures are performed by the surgeon is a critical factor. “There are a lot of things going on here, but the whole idea of disclosure and consent, I think, is the most important,” Dr. Benninger said.

Another fictional case involved a 67-year-old surgeon who had always been a team player, willing to cover for colleagues, but over the previous few months had shown dramatically different behavior, growing abusive toward residents and arriving late to office hours and the operating room.

Dr. Benninger said he would wonder, “Is this just a competency issue, or is this something else? I would be concerned about drug and alcohol use for somebody who had a relatively sudden change. The other [possibility] would be early Alzheimer’s Disease.”

Dr. Bradford said substance abuse is “a real problem” that requires appropriate and immediate medical intervention. Her university has an evaluation and coaching program for the disruptive physician that can have impressive results. “For the physicians who have been in that program, most acquired a skill set that was helpful in their professional and personal lives, and they very, very much appreciated the education,” she said. “I would have anesthesiologists contact me after the fact and say, ‘I don’t know what you did, but it was really, really helpful.’”

Dr. Grundfast said that he confronted a situation involving an aging physician whose skills had seemed to be deteriorating, used the hospital’s mandatory “Ongoing Physician Professional Evaluation” (OPPE) process as a way to monitor the physician’s competency, and then had conversations with the physician centered on the formatted OPPE. The physician was entirely cooperative and, soon after the evaluation process was under way, he decided to retire. “It was extremely difficult to confront this individual, who is now well up in years,” Dr. Grundfast said. “And the way it was done was with some candid conversations.”

Dr. Stewart said that sometimes a simple conversation over coffee can have real effects. Occasionally, a physician whose behavior is becoming a problem may shrug it off, but sometimes they have no idea. “Just sitting down with them and having an honest conversation can make a big difference,” he said. The reaction will sometimes be: “Really? Have I really missed this?”

But sometimes, a stern approach is clearly necessary, Dr. Healy said. He told the story of a “superstar” surgeon who, according to the head operating room nurse, was telling offensive jokes in the OR, making his colleagues uncomfortable. Dr. Healy called the surgeon into his office and asked him whether this was true. When the answer was yes, he told him, “The surgical team is a family. As a family member, you cannot do this anymore because it really taints the entire family—and you professionally.”

Three months later, the nurse returned and said the situation had actually gotten worse. Dr. Healy told the surgeon that he had one month to get help or find another job. “He didn’t get help, and he had to leave—that was tough love,” Dr. Healy added. “I ask all of you to think about these issues. It may not be somebody telling offensive jokes. It may be something else. But you’ve got to deal with aberrant behavior. You must offer to get these people help, but you’ve got to be tough at the end of the day, because it reflects on the whole department and the profession.”

Thomas Collins is a freelance medical writer based in Florida.