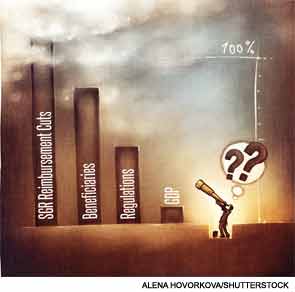 Bolstered by a huge drop in the price tag, committees in both houses of Congress are seriously working on a permanent repeal and replacement of the Sustainable Growth Rate (SGR) Medicare reimbursement formula.

Those familiar with the ongoing efforts say they are unprecedented; however, a sense of urgency remains that consensus must be reached before the August congressional recess, when members go home for summer vacation and when the Congressional Budget Office (CBO) could release new estimates that may once more increase the price of reform.

“I have been lobbying on this for at least 10 years, and this is the first time that congressional committees have actively sought input from the smaller medical societies. We’ve seen some of the things we’ve proposed now included in the legislative mock-ups. Before, you could only comment after the rule was made,” said James C. Denneny, III, MD, the coordinator for socioeconomic affairs at the American Academy of Otolaryngology-Head and Neck Surgery (AAO-HNS). “This is the first time I really think we’re going to get something done.”

The possibility of repeal has likely become more real thanks to new estimates by the CBO that an SGR freeze would cost $139.1 billion over 10 years, down substantially from the November 2012 estimate of $244 billion.

Until now, despite widespread agreement on the necessity of repeal and replacement among provider groups and many members of Congress, it’s been addressed only temporarily. Every year since 2002—and five times in 2010 alone—Congress has made only last minute, short-term adjustments. Meanwhile, in its June report, MedPAC estimated that the 2014 update, absent reform or yet another temporary “doc fix,” would be a 24.4 percent cut in payments.

In the report, MedPAC also reiterated its concerns about the SGR as payment policy: “The SGR formula may have resulted in lower updates, but it has failed to restrain volume growth; in fact, for some specialties the formula may have exacerbated growth. In addition, the temporary increases, or ‘fixes,’ to override the SGR formula are undermining the credibility of Medicare by engendering uncertainty and frustration among providers, which may be causing anxiety among beneficiaries.” In an April letter to Congress, MedPAC emphasized “that the time to repeal the SGR is now.”

Legislation is being prepared by the House Committee on Ways and Means, the House Energy and Commerce Committee and the Senate Committee on Finance. Providers, including Dr. Denneny’s team, have met with staff from all three to work on issues like transition, funding and the quality measures that are the current thinking on provider payments in the private sector as well. The proposals from the three committees have basic goals in common:

At press time, only the bill co-sponsored by Reps. Allyson Schwartz (D-Pa.) and Joe Heck, DO (R-Nev.), is specific about payment updates and transition time. Schwartz-Heck, also called HR 574 or the Medicare Physician Payment Innovation Act of 2013, permanently repeals the SGR and establishes a five-year transition period while gradually modifying the payment formula. Schwartz-Heck, which is the only bill formally introduced so far, calls for positive physician payment updates for all physicians of 0.5 percent each year for four years. The framework for the Energy and Commerce legislation calls for transition time and payment updates but leaves the details open.

A staff member familiar with work in the House who asked not to be named said the Energy and Commerce Committee is less interested in the more gradual approach outlined in Schwartz-Heck. Because of disagreement on transition and payment schemes, the bills are on different tracks, the source said.

On the Senate side, Finance Committee Chairman Max Baucus (D-Mont.) and Ranking Member Orrin Hatch (R-Utah) joined these efforts in the House on May 10, calling for stakeholder input on legislation to repeal the SGR formula and replace it with alternatives that “promote efficiency and reward care based on quality and value, rather than volume.” In a letter to physicians groups, Baucus and Hatch asked for answers to specific questions on reforms.

It helps that the price of reform has dropped, but success depends on the feasibility of replacement, said Dr. Denneny and congressional sources. “There seems to be a sort of momentum, and we’re hopeful the momentum can continue,” said Greg Lemon, spokesperson for Rep. Heck, the Republican co-sponsor of the Ways and Means bill. “Basically, there needs to be a shift from fee-for-service to a more merit-based, performance-based quality of care system.”

Such a structure will likely include performance-based payments, with emphasis on primary care services. Essentially, payments for quality care and for efficient use of resources would be added to a base payment rate.

Physicians are concerned that quality and efficiencies must be carefully defined and stringently evidence based, that there is sufficient time to pilot changes and that they have support in paying for new infrastructures.

Lawmakers acknowledge that physicians shouldn’t be penalized for treating higher-risk populations. Furthermore, some specialties have large amounts of available data on a few common procedures, and their practices are often large. By contrast, collecting such data is tricky for specialties like otolaryngology that have a diverse sub-specialization, provide services that treat a wide variety of ailments and age groups and usually have small practices. These factors make capturing quality measures or economies of scale difficult, said Dr. Denneny.

The data-collection infrastructure that has been proposed to make performance-based Medicare payments possible is a major undertaking, said Dr. Denneny, and any such mandates must be adequately funded.

The Affordable Care Act (ACA), now law, authorizes $75 million over five years “for the development of quality measures at AHRQ and the Centers for Medicare and Medicaid Services (CMS), and another $20 million “to support the endorsement and use of endorsed quality and efficiency measures by the HHS Secretary for use in Medicare, reporting performance information to the public, and in health care programs,” according to a section-by- section analysis of the law by the Senate’s Democratic Policy and Communications Center. But at press time, those funds had not been appropriated by Congress.

Funding the provisions already included under the ACA would help ease physician worry on this issue, said Dr. Denneny. “It could cost $1 million to $3 million just to set up a registry, and that doesn’t even include the quality measures that have to be done,” he added. “In transitioning to the performance-based system that will be benefitting the country and benefitting patients, we should share the costs. Given the investment we’re going have to make, we’re interested that there’s federal help in the cost of that, and one way to do that is to allocate the funds that were agreed upon.”