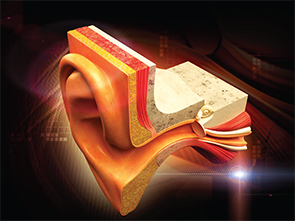 Eustachian tube dysfunction is estimated to occur as a chronic condition in approximately 4% of adults worldwide, but it is an intermittent problem in an unknown higher percentage (Clin Otolaryngol. 1992;17:317-321). The condition is multifactorial. In many cases, inflammation of the mucous membranes in and around the Eustachian tube produces obstruction. Uncoordinated movement of the muscles that open and close the tube may also play a role. Extrinsic factors such as excessive lymphoid tissue around the Eustachian tube opening may also be seen. If chronic Eustachian tube dysfunction remains untreated, it can lead to cholesteatoma and hearing loss.

Initial treatment targets the potential causes of mucosal inflammation, such as allergic rhinitis and acid reflux. This often includes topical or oral steroids, antihistamines, and acid-suppressant medications. “However, none of these have proven to be reliably effective,” said Edward McCoul, MD, MPH, director of rhinology and sinus surgery at Ochsner Clinic and Health System in New Orleans, La.

The indications for surgery are still being determined, and research is ongoing. Surgery may be appropriate for patients with chronic Eustachian tube dysfunction that is moderately severe and disrupts daily function or in the presence of chronic middle ear fluid that produces hearing loss.

For many years, tympanostomy tubes were the only available treatment. “Although generally quite safe, this invasive procedure has the potential to produce sequelae, including tympanic membrane perforation, scarring, and hearing loss,” Dr. McCoul said. “Previous generations of otolaryngologists practiced catheterization and irrigation of the Eustachian tube, but this was eventually abandoned due to ineffectiveness.”

In addition, a diagnostic tool that reliably identifies and measures Eustachian tube dysfunction—the Eustachian Tube Dysfunction Questionnaire (ETDQ-7)—is now available (Laryngoscope. 2012;122:1137-1141). “A clinician can use the short, validated symptom score to both identify Eustachian tube dysfunction and assess the response to treatment in adult patients,” said Dr. McCoul, one of the tool’s developers and co-author of a paper about the assessment tool.

Here’s a look at what balloon dilation entails, as well as some other more recent management methods.

Peter Catalano, MD, chief of otolaryngology at St. Elizabeth’s Medical Center, professor of otolaryngology at Tufts University School of Medicine, and medical director of research for Steward Health Care, all in Boston, Mass., was the first to perform this procedure in the U.S. with the technologies currently available. “I developed a way to anesthetize the Eustachian tube lumen for in-office dilation and replace myringotomy and tube insertion with a simple technique that could also be used as an adjunct to other nasal and sinus surgeries in the operating room,” he said.

In short, the procedure entails inserting a specially designed catheter with a small balloon at the tip through the nose and into the Eustachian tube, inflating it, and then withdrawing it, Dr. McCoul said.

A study of 100 Eustachian tube dilations with follow-ups over two years showed a 70% success rate and 15% recurrence rate (Otol Neurotol. 2012;33:1549-1552). “Repeat dilation is always effective and can easily be done in the office,” Dr. Catalano reported. Approximately 40% of patients were treated in an outpatient clinic and 60% in the operating room.

To date, no one has established how Eustachian tube dilation works. Consensus is that after dilation, the Eustachian tube opening pressure required for normal Eustachian tube function is reduced. Dennis Poe, MD, PhD, associate professor of otology and laryngology at Harvard Medical School and associate in otolaryngology at Boston Children’s Hospital in Boston, and colleagues have shown a significant inflammatory infiltrate in the submucosa of the dysfunctional Eustachian tube lumen, making it feasible that infectious, allergy, or another immune process within the cartilaginous portion may play a larger role than previously appreciated (Laryngoscope. 2014;125:436-441).

The key impediment to more widespread use of balloon dilation is two-fold: the absence of a technology specifically designed for this purpose and the cost of technology. “Several companies are developing Eustachian tube-specific balloon dilation systems, which will hopefully address both of these issues,” Dr. Catalano said. Another problem surfaced when the American Academy of Otolaryngology–Head and Neck Surgery deleted all CPT codes related to Eustachian tube surgery in 2014, stating that they were obsolete. “This leaves the ENT community with no way to obtain reimbursement for the procedure or technology,” he said.

“Nonetheless, balloon dilation is being performed on select patients with Eustachian tube dysfunction who have failed other treatment options,” Dr. McCoul said.

Dr. Poe is the principal investigator of a clinical trial mandated by the U.S. Food and Drug Administration (FDA) comparing balloon dilation with nasal steroid spray for Eustachian tube dilatory dysfunction in an effort to get the device approved by the agency. The FDA requested that the trial be performed in comparison to medical management, which is commonly used in clinical practice despite a lack of evidence that medical therapy influences dilatory dysfunction.

As a rhinologist, Dr. Metson often combines balloon dilation with a microdebrider to perform Eustachian tube and sinus surgery. This thin hollow tube has a rotating blade at the tip that shaves swollen tissue from the opening of the Eustachian tube to enlarge it. He has had fairly good success with this procedure. The microdebrider can also be used alone and is ideal for patients with polyps, hypertrophic tissue, and adenoid tissue that may be contributing to Eustachian tube or sinus obstruction.

Obliteration for cerebrospinal fluid (CSF) leak repair is used for lateral skull base or posterior fossa lesions that result in a spinal fluid leak that drips down the Eustachian tube. Spinal fluid leaks occur in 5% to 10% of skull base surgeries, such as vestibular schwannomas.

The surgery involves a transnasal, transoral endoscopic approach. The endoscope is inserted into the tip in the nose. A tonsil mouth gag is inserted into the mouth to provide greater access to the Eustachian tube, which facilitates dissection and suturing. Dr. Poe uses an angled microdebrider blade passed through the mouth to remove mucosa 360 degrees around the Eustachian tube and as high as possible in the lumen. The lumen is filled with AlloDerm (a cadaveric dermis product) and oversewn shut.

“It’s important to only remove surface mucosa and not allow the microdebrider to dig deeper into tissue, which can create significant bleeding,” Dr. Poe said. “We have to always be aware of the location of the internal carotid artery in this area, but keeping the dissection within the cartilaginous Eustachian tube provides an adequate margin of safety.” The complete obliteration will normally scar over fully, and long-term outcomes are excellent, because it shouldn’t recur, Dr. Poe said.

The surgery is a useful alternative to inserting a lumbar drain for three to five days or trying to plug the neurosurgical wound from the inside. In addition, patients tolerate it much better and spend fewer days in the hospital. Although a lumbar drain is still required in order to keep the seal dry for the first few days, less time is necessary.

In the most commonly performed procedure, Dr. Poe threads a 14-gauge intravenous angio-catheter, pre-occluded with bone wax, through the mouth, and inserts it into the full length of the Eustachian tube. “It will wedge nicely into the boney-cartilaginous isthmus where the Eustachian tube narrows, holding it in place, but it usually won’t block it,” he said. Because it’s flexible, the catheter will lie in the longitudinal concavity in the wall of the Eustachian tube where the leak is occurring. “The procedure is done in the operating room because it is uncomfortable,” Dr. Poe said.

Although the procedure’s immediate success rate is more than 90% and the catheter is well tolerated, that number drops over time because some catheters become displaced, extruding from the nose or mouth after months or years. If the catheter falls out, a scenario that occurs approximately 40% of the time, according to Dr. Poe, a patient’s symptoms may or may not return. This is because mucosa rejuvenates itself, stopping the air leak. To date, no one has ever aspirated or choked on one of the catheters.

For small defects in favorable locations, hydroxyapatite or collagen fillers can be injected into the submucosa of the Eustachian tube. Some surgeons are performing these procedures in an office setting.

For failures of the above procedures, a more definitive repair can be done by sub-total occlusion of the lumen with an Alloderm implant using a technique similar to the CSF obliteration, but leaving a mucosal strip inferiorly to prevent complete blockage. Cartilage grafts can also be placed in a submucosal pocket to narrow the lumen.

Patients first have a CT scan to ensure that the carotid artery is protected by bone. If there’s any chance of encountering the artery, Dr. Poe won’t perform the procedure. All of the materials placed into the Eustachian tube are currently off-label uses, as is the use of an intravenous catheter.

“Patulous Eustachian tube repair is much more successful than the alternative procedure of inserting a tympanostomy tube,” Dr. Poe said. “As opposed to completely obliterating the Eustachian tube, as was done in the past, it allows for reversible functional repair that is minimally invasive. Other procedures, such putting ointment or sticky tack on the eardrum so it doesn’t move as much while breathing, work in some but not all patients.”

Elias Michaelides, MD, associate professor of surgery in otolaryngology and director of the Yale Hearing and Balance Center at the Yale School of Medicine in New Haven, Conn., said, “We have found that we can be much more aggressive in narrowing the Eustachian tube and restoring normal function by using advanced techniques than we first thought.”

A paper by Dr. Michaelides and a colleague provides protocols to use in the diagnosis of a patulous Eustachian tube using standard audiology equipment and a physical test, a method that is preferred over only using a patient’s medical history (J Am Acad Audiol. 2011;22:201-207).

Reconstruction of the Obliterated Eustachian Tube

Dr. Poe has had good success with the intervention, which he has used on 15 patients. “These patients had an obliterated Eustachian tube that needed to be reopened,” he said. Causes included sinus surgery, an over-aggressive adenoidectomy from childhood, complete scarring of the Eustachian tube from connective tissue disease, and trauma from a gunshot. “In the past, there was no technology available to safely unblock the Eustachian tube,” he said. “Now this may be a possible alternative when other procedures aren’t expected to be effective.”

Although no studies evaluating the technique have been published to date, Dr. Poe is working to publish his results with the non-FDA-approved procedure.

Hope for the Future

Looking ahead, advancements in certain areas are particularly desirable. These include the ability to deliver balloons safely though the ear so that an ear operation and dilation of the Eustachian tube can be done simultaneously. In addition, Dr. Poe said that commercial shims are needed for the patulous so that non-FDA approved intravenous catheters are no longer needed. “We need more instruments, particularly diagnostic equipment for Eustachian tube dysfunction and instrumentation that enables procedures to be done in the office,” he said.

Karen Appold is a freelance medical writer based in Pennsylvania.

If the condition recurs after extrusion of tubes in children, Dr. Alper will reinsert the tubes and consider removing the adenoids and evaluating and treating common risk factors of Eustachian tube dysfunction, including nasal allergies, sinus infections, and gastroesophageal reflux disease.

Although there aren’t any recent developments in treating pediatric patients, Dr. Alper said, “Incomplete removal or regrowth of adenoids may impinge the Eustachian tube opening.” In these instances, he removes the tissue in addition to medical management—resulting in improved function.

At this time, there are no controlled studies to support the efficacy of any alternative treatments for Eustachian tube dysfunction, including balloon dilation, reported Dr. Alper, who is in the process of conducting research on this method in adults. “Efficacy and safety of new treatment methods ethically requires testing in adults first,” he said.—KA