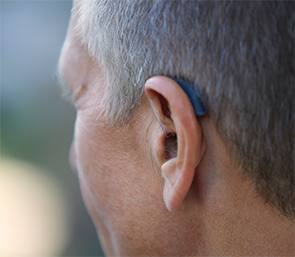 The behind-the-ear ReSound LiNX2 is designed to be discreet.
Image Credit: Courtesy of GN ReSound.

The next time you see someone tapping and sliding their fingers across their smartphone screen, they might not be texting or surfing. They might be improving their hearing.

New hearing aids introduced last year that are adjustable, smarter, and more nimble with the use of a smartphone app have given the hearing impaired much more control over their listening environments and have helped shed the stigma associated with having to reach up to their ears to adjust the device.

The ReSound LiNX2, manufactured by GN ReSound (Bloomington, Minn.), and the Halo, made by Starkey Hearing Technologies (Eden Prairie, Minn.), were introduced almost simultaneously in early 2014, and they remain the only two players in the market, although the devices sometimes go by other names. The Beltone First is made by the same manufacturer as the LiNX2, and the Halo is also marketed as the Audibel A3i, Audigy AGXsp, MicroTech Kinnect, and the NuEar iSDS.

Using a low-energy Bluetooth signal, the devices allow users to adjust the left and right volumes and the bass and treble using an app on their smart phones (ReSound Smart for the LiNX2 and TruLink for the Halo). Users can also stream music and video sound from their phones directly to the device. They can use their phones to better “target” the area they’re trying to hear and store settings for specific locations that can be automatically recalled using the phone’s GPS system.

Both are compatible with iPhone and iPad, as well as Android products, but music and video sound cannot be streamed directly to the hearing aid on Android smartphones due to differences between Apple and Android technology. They also both work with the Apple Watch, but only to use certain key features.

TruLink includes a feature called SoundSpace that allows users to more easily make adjustments to combinations of loudness, softness, bass, and treble by sliding a fingertip across a field, rather than adjusting each setting individually. Halo also includes a car mode that senses when a user is traveling faster than 10 mph and switches to settings that allow for easier listening in the difficult environment of an automobile.

The ReSound Smart app includes spatial sense, in which the hearing aids communicate with each other to help improve spatial awareness, directionality in hearing, and speech understanding.

Both hearing aids are priced within a range that begins at just under $2,000 and goes up to $3,000; the price varies with market conditions and according to the retailer.

The LiNX2 also offers a few more sizes. But the basic choices—an in-the-ear-canal style or a behind-the-ear version with a tube entering the canal—are common to both. Smaller hearing aids have less battery life—enough for several days—and the larger ones have batteries that last about a week.

As a class, the manufacturers say, the devices represent a dramatic step forward in hearing-aid technology. Previously, hearing aids have had wireless capability but required users to wear an accessory around their necks or clipped to their shirts, which many felt was undesirable.

“There still, of course, is a stigma associated with hearing aids, and one of the things that’s so nice about these types of hearing aids is you never have to reach up to adjust [it],” said Laurel Christensen, PhD, chief audiology officer at GN ReSound. “You are adjusting your hearing aid on your phone, and guess what? Everyone else in the world is on their phone, too.”

Dave Fabry, PhD, vice president of audiology and professional relations at Starkey, said that the ease of adjustment can help avoid a common challenge for people who use hearing aids: Their hearing aids sound fine when they’re in the clinic but require additional adjustment once they are out in the “real world.”

“It represents a frustration and an opportunity for both the clinician and the patient,” Dr. Fabry said. An “important capability relevant to the otolaryngology environment is the ability of patients with fluctuating or progressive hearing losses to optimize hearing aid settings beyond the clinical environment.”

The smallest behind-the-ear styles have become the most popular, Dr. Christensen said. “They’re very comfortable to wear, and they’re very, very small, and that has become a very popular style,” she said.

Jill Gruenwald, AuD, assistant director of the adult hearing aid program at Vanderbilt University in Nashville, Tenn., said wireless ability without a neck accessory is a big deal for many patients. “Many patients found the additional accessory useful for smartphone streaming but cumbersome to charge or wear,” she said. “Patients also felt that the accessory drew attention to their hearing aids or hearing loss. I have had more than one patient state [that] he or she is asked consistently, ‘What are you wearing?’”

Dr. Fabry said that, although it’s tempting to assume the devices are only for technophile baby boomers, some patients in their later 70s and 80s have embraced the technology. “I would say that there is some basic technical or electronic know-how required to use the iPhone features,” she said. “For patients who are not comfortable with iPhone apps or technology, they may not be able to use as many of the functions as patients more comfortable with the technology.”

Users praise the products in online reviews, but some also complain that the hearing aid can stop working shortly after music and videos are streamed, that they can be slow to connect when the app is first opened, that they can switch to a pre-set location setting when the user is not actually there, and that the Bluetooth connection can be lost in one or both ears all of a sudden.

Dr. Fabry said that, as with any wireless device, it is difficult to distinguish between connectivity issues in the hardware from those in the antenna. “When iOS8 was first introduced, there were some issues impacting hearing aid connectivity that impacted MFI [made for iPhone] devices,” he said. “This was brought to Apple’s attention. It has been resolved, and connectivity issues have been dramatically reduced. We work closely with Apple to optimize the user experience.” In responses to posts on message boards, ReSound officials have said that some connection issues have been fixed by updates in Apple’s iPhone software.

Changing batteries could also be a hurdle for some patients with limited dexterity, Gruenwald said.

Douglas Backous, MD, medical director of the Center for Hearing and Skull Base Surgery at Swedish Medical Center in Seattle, said any user of a hearing aid could benefit from these new options. But, in the end, it’s largely a personal choice. “We encourage patients to determine what options they want in the various aids available,” he said.

Gruenwald said that the devices might mean that those who need it will pursue help with their hearing sooner. “It is widely known that patients with diagnosed hearing loss generally wait years before actually pursuing hearing devices. Perhaps features like the direct-to-iPhone capability will make hearing aids seem more appealing and generate faster adoption of hearing-aid use.”

Thomas Collins is a freelance medical journalist based in Florida.