Could a clinical grading system for Reinke’s edema (RE) based on size of the lesion facilitate effective universal communication of disease severity?

Bottom line
A clinical grading for RE is a reliable tool for conveying severity of disease. High inter- and intra-rater reliability strongly suggest that RE similarly can be graded by different raters, and that a single rater is expected to grade RE similarly at different times. 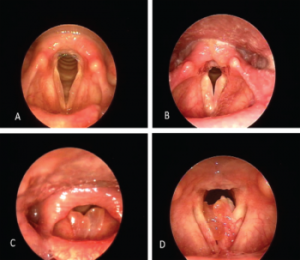 Background: RE is a benign laryngeal disease involving diffuse polypoid degeneration of the vocal folds, most commonly preceded by chronic tobacco use. Morphologic changes of the vocal folds are the result of edema, vascular congestion, and venous stasis within the superficial layer of the lamina propria, known as Reinke’s space. It is believed that chronic irritation alters the permeability of capillary walls, leading to extravasation of fluid into Reinke’s space and making the vocal fold cover less stiff, more massive, and more compliant. Disease severity is variable. Although patients experience varying levels of dysphonia, some also report dyspnea, either consistently or intermittently. In severe cases, lesion size can compromise airway.

Interventions range from observation with recommendation for smoking cessation to surgical removal for dysphonia and glottic airway obstruction. Size of lesion may implicate favorability of one treatment approach over another. This study proposes and aims to validate a clinical grading system based on size of the lesion to facilitate effective universal communication of disease severity.

Synopsis: Patients diagnosed with RE exclusive of other glottic pathology between December 2010 and December 2014 were included. Sixty laryngoscopy photographs were extracted from recorded archived laryngeal videostroboscopy exams, blinded and graded by four laryngologists with experience diagnosing RE.

Each clinical photograph was presented to each reviewer at three separate, randomized times within a single slide presentation. Images were graded on a scale of 1 to 4 based on amount of glottic airway occupied by the lesion. Graders were given the following guidelines for grading, as well as a grading schematic. The right and left lesions were graded separately, except in the grade 4 category, where it was unanimously agreed among the raters that laterality is not only difficult to identify but also clinically irrelevant.