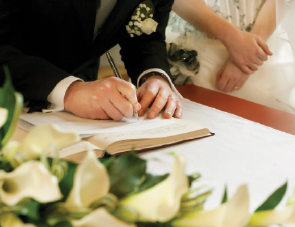 When Leslie Williamson, MD, wed nearly four decades ago, changing her maiden name to her husband’s surname would have come at a cost. “When we married, I had already been a physician for three years,” said Dr. Williamson, an otolaryngologist with the Shannon Medical Center in San Angelo, Texas. “Even though I considered changing my name, I discovered the cost was prohibitive to change it on my [medical] license.”

Her board certifications and professional memberships were also in her maiden name, and changing those, along with other documents such as her driver’s license, would have also taken time, effort, and money. “I’m non-ideological about it,” she said. “I was not seeking to make any political statements. I’m in medicine, not politics.”

Dr. Williamson, who has been married for 37 years and has two children with her husband, Jim Cogan, uses her surname. The couple’s children, Jonesy and Stephen, used their dad’s last name growing up. Having a family with two last names never caused any issues. “Sometimes my husband is called Mr. Williamson, but he just laughs,” she said.

What’s In A Name?

In the United States, women have traditionally taken their husbands’ last names after marriage. According to two random sample naming studies, women who are most likely to keep their birth surname when they marry have higher levels of education, marry at a later age, are nonconventional about gender roles, have established an identity in their careers, and are less likely to be religious, said Laurie K. Scheuble, PhD, a senior lecturer in sociology at Pennsylvania State University in State College.

“The most surprising, almost shocking thing to me has been the small percentage of women who retain their maiden name as their last name when they marry,” said Dr. Scheuble, who has studied marital naming for the past 25 years. Approximately 7% of women had a surname different from their husbands’ in 2004 (Fam Issues. 2010;31:681-701). That’s up from 2% in 1984, according to Dr. Scheuble’s research (J Marriage Fam. 1995;57:724-732). Another 1% hyphenate their maiden name with their husband’s last name, she said.

“When I started to do this research, I was convinced that the percentage of women keeping their birth surname would increase, but now I think that there will be very little increase in women keeping their birth surname as a last name,” she said. “I think this is interesting, as women have worked hard to have equal rights and opportunities in work and housework roles. Naming seems to be the last socially acceptable sexism.”