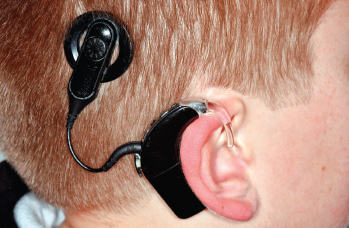 Congenital hearing loss is fairly prevalent and can be devastating for patients and their families. Not only can this condition impede a child’s educational attainment, but it can also affect his or her future employment, income, and overall quality of life.

A session on this topic at the Triological Society Annual Meeting was moderated by John Bent, MD, director of the pediatric otolaryngology division and otolaryngology residency program director at Montefiore Medical Center and professor of both otolaryngology–head and neck surgery and pediatrics at Albert Einstein College of Medicine in in Bronx, NY. The panel of experts, through a series of case reports, examined best practices for neonates identified with severe/profound bilateral sensorineural hearing loss (SNHL). Within congenital hearing loss, the panel also looked at cytomegalovirus (CMV), genetics, unilateral moderate hearing loss, unilateral versus bilateral cochlear implants, and cochlear implants for single-sided deafness.

Case one is a full-term, non-syndromic, otherwise healthy newborn who has failed the newborn hearing screen.

Matthew L. Bush, MD, PhD, vice chair for research and associate professor in the department of otolaryngology–head and neck surgery at the University of Kentucky in Lexington, said, “This child is facing a ticking clock and the timing of treatment is critical. In a full-term newborn who fails a newborn hearing screening test, we need to repeat testing within the first month after birth.” Some birthing hospitals perform repeat screening testing during the birth admission of infants who fail their screening test to decrease the false positive screening results. Screening and follow-up testing is sometimes delayed in premature infants; however, Dr. Bush advocated for early screening and then follow-up testing to be completed as soon as feasible.

Some evidence shows that if hospitals are involved in scheduling outpatient audiologic follow-up, there is a higher rate of compliance and potentially a shorter time before diagnosis, he added. This requires partnerships between hospitals and audiology and otolaryngology practices.

“Timely diagnosis and treatment of hearing loss is the key in young children, and we should advocate for our healthcare systems to be compliant with the national Early Hearing Detection and Intervention (EHDI) recommendations of meeting the ‘1/3/6’ goals—all infants screened no later than one month, all infants who fail screening have a definitive diagnosis no later than three months, and then intervention occurs by six months,” he said (See “National Early Hearing Detection and Intervention 1-3-6 Goals,”).

“We need to become leaders in early hearing detection and intervention in order to bridge socioeconomic disparities in healthcare delivery amongst children in need of cochlear implantation (CI).” Unfortunately, Dr. Bush added, there are no EHDI initiatives involved in CI. For the child in this case, the first diagnostic test outside the hospital should be as soon as possible, he said. If a child is premature, then he or she may need to reach full term before diagnostic testing. Hearing aids are needed by three months, but as soon as possible is the ideal. If there is profound hearing loss, then rapid implantation is necessary.

“Given that our patients are from diverse backgrounds and regions, delivery of timely, equitable, and appropriate treatment takes leadership on the part of the physician,” he said. “We can partner with our state EHDI programs to provide culturally
appropriate low-tech solutions to support families. Our work from 2018 demonstrated that a parent support program, such as patient navigation, can improve adherence to 1/3/6 EHDI guidelines (Laryngoscope. 2017;127:S1-S13). This can involve enlisting the families of children who have gone through the EHDI process to help other families immediately after the screening testing. Support programs such as this can be truly valuable.”

With regard to imaging, Dr. Bush said that MRI is a suitable tool for the evaluation of most pediatric CI candidates, and a CT scan would work if it’s hard to schedule an MRI.

The decision on how to treat a newborn who fails a screening test depends on money and philosophy, said Blake C. Papsin, MD, MSc, current president of the American Society of Pediatric Otolaryngology and professor of otolaryngology at the University of Toronto in Ontario, Canada. “The science is sound,” he added. “The earlier you can restore the bilateral state, the better it is for the developmental trajectory. If you implant appropriately and have the money and skills, then you can get the baby on and off the operating table in less than three to five hours with minimal blood loss.”

“We don’t operate on a lot of kids under 1 [year of age], either because there is concern about the accuracy of the diagnosis, or money is an issue, or the parents say ‘no,’” he added. “A real challenge in pediatric implantation is the ability to achieve a solid diagnosis and have the appropriate technical skills.”

There is a lot of hope that CI is the answer for single-sided deafness but, at this point, it is just hit or miss. There are no high-quality studies proving that it really works in this group of kids. —Judith E. C. Lieu, MD, MSPH

Case two is a newborn who has failed a hearing screening. Auditory brainstem response (ABR) is done in an expedited fashion per protocol before three weeks of age. The child is diagnosed with mild to moderate bilateral SNHL with a normal physical exam.

According to John H. Greinwald, Jr., MD, of the Ear and Hearing Center and professor in the departments of otolaryngology and pediatrics at the University of Cincinnati, the key in this case is to get an expedited cytomegalovirus (CMV) test. In Ohio, all newborns who fail their initial screening have ABR within two weeks. CMV is the most common non-genetic cause of hearing loss in children, he said, with roughly 10% to 15% of patients eventually developing hearing deficits.”

“A CMV microculture of a salivary swab/urine is also widely available and is highly sensitive and specific, said Dr. Greinwald. “The downsides are that it is slightly more time consuming and can have somewhat higher personnel costs.

“The CHIMES study indicates that if there is suspected congenital SNHL then you do early CMV screening and, if that is positive, then you give valganciclovir or ganciclovir for six weeks,” he added. “If those cannot be not tolerated, then consider a pressure equalizing tube and intratympanic antiviral therapy.”

Dr. Papsin said he disagreed on one point. “We screen for congenital CMV because it is important to identify this at birth. We have tried directed screening where we only do CMV testing on those who have failed a hearing screen, but we miss a lot of asymptomatic children who will go on to develop hearing loss. CMV is the new boogeyman of infant screening.”

Case three is a 5-year-old with moderate to severe bilateral SNHL who was treated with hearing aids for several years. His speech development is doing well, and there has been no evaluation for the etiology of the hearing loss.

Dr. Greinwald said, “In our practice we consider [that] all children from preschool to kindergarten who fail are likely congenital and that they are going to have similar causes of hearing loss. He said that more than half of hearing loss is genetic, with a lot of the literature showing that it is primarily non-syndromic. He cautioned that, while otolaryngologists should perform a physical exam, it is not always reliable, and he advised consulting with ophthalmology, genetics, and developmental pediatrics.

As for genetics, he said there is single gene testing (e.g., GJB2, 12SrRNA, SLC26A4) and multigene testing with Nexgen technology. There is also non-sydromic (recessive) and syndromic (Usher, SLC26A4, Alports, and Jervell and Lange-Nielsen). “With regard to genetics, our philosophy is that we are mostly looking for recessive causes of deafness,” he added. “You usually don’t need a genetic test to determine that someone has a dominant cause of deafness, since it is rare to find a new mutation. Many of these will look non-syndromic regardless of the child’s age. As for genetic counseling, there are not enough counselors available. If the child has craniofacial issues, then you should consult a medical geneticist.”

He also said that 20% of congenital SNHL cases will have inner ear malformations and, while imaging is important, it is expensive and insurance doesn’t typically cover it. “I argue that we image a newborn, not a 5-year-old, and that we do all MRIs at three months because, at that point, sedation is unnecessary,” he added.

Given that our patients are from diverse backgrounds and regions, delivery of timely, equitable, and appropriate treatment takes leadership on the part of the physician. —Matthew L. Bush, MD, PhD

The next case involves a 5-year-old with recently diagnosed mild-moderate unilateral SNHL who is supposedly doing well socially and cognitively. Should this child have a hearing aid?

Judith E. C. Lieu, MD, MSPH, a professor in the department of otolaryngology-head and neck surgery at Washington University in St. Louis, said, “This is one of the most difficult situations because, although speech and language delays are common in children with profound hearing loss, this is not the case with mild-moderate unilateral hearing loss. Because this child has not yet had academic or behavioral problems, the parents are probably not prepared for a hearing aid. There is no solid evidence for a hearing aid, so it comes down to parent preference and whether they are concerned about the child falling behind.”

She added, “I just want to highlight this fundamental point: Even though we think the ears are the center of hearing, it is actually the brain—and that is where the issues arise later on.”

CMV is the most common non-genetic cause of hearing loss in children, with roughly 10% to 15% of patients eventually developing hearing deficits.

The next case involves a 6-year-old with SSD.

While delays in speech-language development are common, they are not universal, said Dr. Lieu, adding that the child’s quality of life may be negatively affected by severe-to-profound UHL. Cognitive development may be negatively affected and is mediated by phonological processing, and there is a cortical network development that may be maladaptive. However, she added, “There is no solid evidence for or against amplification, so we are all working on our best judgment.”

“One study showed that 24% of these children experience academic weakness or executive function (per teachers),” she said (Laryngoscope. 2012;122:2088–2095). “And there is data indicating high rates of special education among children with unilateral hearing loss [Otol Neurotol. 2016;37:1577–1582]. The risk for educational issues doesn’t mean that all kids have delays, however. For example, there are otolaryngologists and medical students with single-sided deafness who do very well.”

“There is a lot of hope that CI is the answer for single-sided deafness but, at this point, it is just hit or miss,” said Dr. Lieu. “There are no high-quality studies proving that it really works in this group of kids.”

“There are changes in the brain when there is hearing deprivation, both in the white matter and gray matter,” she said. “UHL results in whole brain adaptations; these are long haul situations, and often a hearing aid will not provide immediate improvement. This requires that someone work with the child for weeks, months, or even years before they see a difference.”

Elizabeth Hofheinz is a freelance medical writer based in Louisiana.

Dr. Bush is a principal investigator for Advanced Bionics, an advisory board member for Med El, and an educational course director for Stryker. Dr. Papsin is a sponsored speaker for Cochlear Americas.