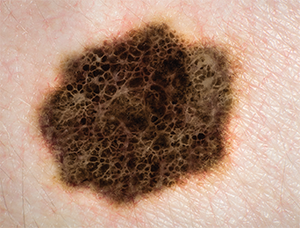 The rate of skin cancer occurrence in the United States is “climbing at epidemic proportions,” said Cecelia Schmalbach, MD, MSc, professor and vice chair of otolaryngology-head and neck surgery at Indiana University School of Medicine in Indianapolis. In 1960, the incidence of melanoma was one in 600 in the United States; in 2012, it was one in 36. The disease is more common in men; after age 40, it’s twice as common in men than in women. But, in one of four new cases, the patient is younger than 40. Melanoma is also the most common cancer in women aged 25 to 29 and the second-most common in women aged 30 to 34.

Mortality from melanoma has increased by approximately 3% since 2004, and more than 10,000 people will die from the disease in 2016. According to the National Cancer Institute, 40% to 50% of Americans will have at least one basal cell or squamous cell cutaneous carcinoma by age 65.

A surgeon’s or center’s experience, as well as a quickly changing evidence base, can influence decisions made in the treatment of skin cancers. Panelists at the American Academy of Otolaryngology-Head and Neck Surgery Foundation Annual Meeting discussed how they and their tumor boards would handle a variety of cases.

Case 1: Melanoma on the Scalp

Carol Bradford, MD, professor of otolaryngology and executive vice dean of academic affairs at the University of Michigan Medical School in Ann Arbor, said that a history and physical would be acceptable for work-up, but noted that a wide local excision and a sentinel node biopsy would be the best staging study.

For Stage 1 and 2 melanomas, the National Comprehensive Cancer Network (NCCN) guidelines suggest just a history and physical, with imaging performed only for specific symptoms. In this case, even though desmoplastic tumors have a lower rate of positive nodes, Dr. Bradford advised considering a sentinel node biopsy. “You’re not really biopsying the whole thing and there are very few true, pure desmoplastic melanomas, so this patient would still be eligible for sentinel lymph node biopsy,” she added. She said that the surgeon should have a conversation with the patient to make it clear that while the biopsy is recommended, the patient is not certain to benefit from it.