Diagnosing and addressing hearing loss, particularly in midlife, can help ameliorate the increased risk of dementia associated with the hearing loss. 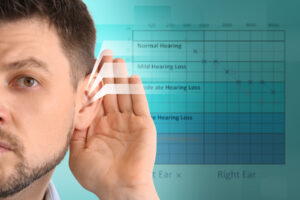 “The evidence consistently shows that people who have normal memory and cognition are at an increased risk of dementia 10 to 15 years after developing hearing loss,” said Gill Livingston, PhD, lead author of the report and professor of psychiatry of older people at the University College London. “This risk appears not to be present in those using hearing aids,” she added.

The report lists hearing loss as one of the modifiable risk factors in midlife, or in persons aged 45 to 65 years of age. Evidence from a meta-analysis available in the 2017 report found that people with normal cognition and hearing loss at a threshold of 25 dB had a relative risk of 1.9% for dementia at nine to 17 years of follow-up. Updates to the meta-analysis presented in the 2020 report continue to show an association between hearing loss and dementia, with an increased risk of dementia per 10 dB of worsening hearing loss.

Although why people with hearing loss in midlife are at risk of dementia is not clear, recent evidence points to steeper loss in temporal lobe volume that includes the hippocampus and entorhinal cortex. “There is neuroradiological evidence of brain atrophy associated with hearing loss,” said Dr. Livingston.

The good news is that data show that using hearing aids can reduce this risk of dementia. The 2020 report cites several studies supporting this solution, including a U.S. nationally representative survey of older adults (>50 years) with hearing loss that found hearing aid use as the largest factor protecting them from cognitive decline based on testing cognitive function every two years for a total of 18 years. Dr. Livingston pointed out that evidence for the protective effect of hearing aids to date comes from cohort studies, with no data from large randomized controlled trials.

Dr. Livingston emphasized that even a little hearing loss can increase the risk for dementia, with the risk increasing with the degree of hearing loss. As such, she suggested that otolaryngologists can make a difference in helping reduce the risk of dementia in their patients by addressing hearing loss.

One key takeaway from the 2020 report: “Encourage use of hearing aids for hearing loss and reduce hearing loss by protection of ears from excessive noise exposure.”