MIAMI BEACH—As much of the rest of the country sat in cold, snow, and even blizzard conditions, otolaryngologists and other health professionals headed south recently to Miami Beach, Fla., for the 2016 Triological Society Combined Sections Meeting, held January 22-24. Senior members of the society and residents and students alike gathered in sessions exploring the pressing questions of the field, from evolving surgical techniques and technologies to discussions on how to adapt to healthcare reform. Nearly 600 physicians were in attendance.

Hamad Chaudhary, MD, MS, a fellow in head and neck oncology at Johns Hopkins University in Baltimore, said he attended the meeting two or three times as a resident, and came back again this year. “As a resident, it was good for engaging in what specialties I was more interested in,” he said. “Now it’s more talking to speakers from across the country and getting to know them. And, because it’s a more intimate meeting, it’s also about meeting a lot of the other residents and fellows from other programs and discussing their thoughts.”

Judith Lieu, MD, MSPH, an associate professor and resident education director at Washington University School of Medicine in St. Louis, Missouri, appreciates the mentoring she, as an educator, receives from the meeting. “I appreciated Gayle Woodson’s comments about ‘Scary Airway’ cases, which brought back lots of memories from my own training and my own practice. I appreciated that someone who has been around for such a long time and is so well respected is willing to share those experiences of fear and soldiering on despite the difficulties, and realizing that some things just don’t change. As a teacher, as an educator, whenever you’re dealing with a patient who is in that type of emergency, you can’t be one who is showing fear. You have to be the one who is the calmest, because everyone else is freaking out—that’s something that I try to teach my residents.” 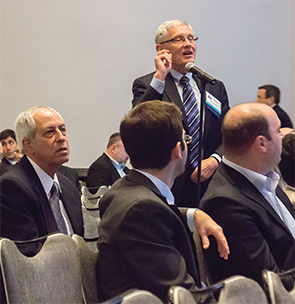 Audience members during a panel discussion.

Change is quickly descending on the medical field, and Triological Society President Fred Owens, MD, of the Owens Ear Center in Dallas, Texas, discussed adapting to change in his presidential address to audience members.

Change has played a big role in both his career and his personal life, he said. He told a story about a change in his life course that occurred as he was heading off to college. In those days, it was not uncommon to hitchhike there, which is what Dr. Owens was doing, carrying just one small bag. Someone stopped to pick him up near a fork in the road, he said, but the driver was headed toward Georgetown College in Kentucky, which is not where Dr. Owens was registered. Dr. Owens’ brother was at Georgetown, so he climbed into the truck anyway. There, he met someone he described as “a pretty nice-looking lady.”