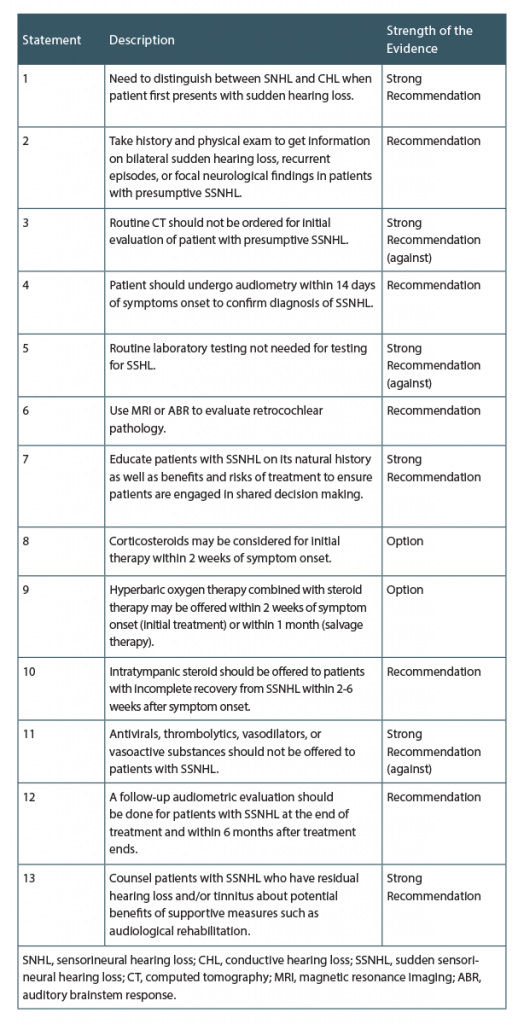 “The new focus … is really on recognizing this condition early so that it can be properly diagnosed and managed promptly while the interventions that we do have—limited as they are—are most likely to be effective,” said Seth R. Schwartz, MD, PhD, an otolaryngologist in the department of otolaryngology at Virginia Mason Medical Center in Seattle, who served as the methodologist for the update group.

Among the action statements that Dr. Schwartz highlighted were the statements strongly recommending education of and shared decision making with patients. The new guidelines, he said, provide “more information about including patients in the decision-making process regarding whether or not to treat and how.”

For example, the guidelines strongly recommend shared decision making between clinician and patient that includes patient preferences. For interventions with a clear evidence base and benefit, shared decision making includes providing patients with clear information on the benefits and risks of treatment to improve their adherence to treatment and outcomes. If the current evidence is weak on a specific treatment or the benefits unclear, clinicians are encouraged to talk to patients about how to think about the potential risks and benefits of the treatment, such as the absolute benefits of the treatment, its adverse effects, how often and long treatment is needed, and its cost. “Given the limited nature of the treatment options, otolaryngologists should know that including the patients in the decision-making process, even if they choose not to be treated primarily, is both valid and important,” he added.

Dr. Schwartz also pointed out that no new interventions are supported in the updated guidelines based on the most current evidence. “The primary treatments are still steroids, either oral or transtympanic, and hyperbaric oxygen,” he said, adding that although primary steroid therapy remains a mainstay of initial management, it “remains surprisingly limited despite a number of new studies.”

He also highlighted that a few new studies suggest a possible benefit for antioxidant vitamins, but said there is not enough evidence to make a recommendation. “But [the evidence] was enough for them [antioxidant vitamins] not to be included in the group of interventions recommended against,” he said.

To facilitate implementation of these action statements, the guideline also provides an algorithm outlining the statements.