The incidence of AG is a subject of debate because of different definitions for tongue tie. —Anna Messner, MD

How Common Is AG?

“The incidence of AG is a subject of debate because of different definitions for tongue tie,” said Dr. Messner. The definition is generally divided into two classifications: anterior (Type 1 and Type 2) and posterior (Type 3 and Type 4). “With the recent inclusion of posterior tongue tie, there has been an overdiagnosis of ties in some areas of the country, leading to babies having procedures that are not really necessary,” she said.

Among newborn infants in a hospital setting, the incidence of AG has been reported to range between 4% and 11%, she noted (Cochrane Database Syst Rev. 2017;3:CD011065). In children older than 6 years of age, the incidence is much lower—between 2% and 3%.

The rates of diagnosis in hospital births increased three-fold in Canada from 2008 to 2013 and 10-fold in the United States from 1997 to 2012, Dr. Balakrishnan said (Paediatr Child Health. 2017;22:382–386). “There is no public heath reason to explain the increase, only an increase in awareness and diagnosis.”

The data on the benefits of treating tongue tie are very weak. … There are no large, well-controlled studies; we need more standardization on the definitions and how to measure outcomes. —Karthik Balakrishnan, MD, MPH

Many issues can contribute to feeding issues in an infant. Therefore, a careful exam of the newborn or infant is needed to diagnose tongue or lip tie, as well as to rule out more serious issues that might affect feeding, including airway issues, neurologic issues, and hypotonia, among others, said Dr. Balakrishnan. 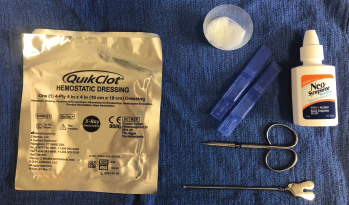 “It is normal for everyone to have a ‘tie,’ or frenulum. However, not all clinicians know what a tongue or lip tie looks like. Doctors may not check under the tongue and therefore miss even the most obvious tongue ties,” Dr. Wei said. To evaluate for tongue tie, “I use my clean finger to “sweep” under the tongue. If I palpate a ridge or I can clearly see the excessive frenulum limiting tongue movement [anterior tongue tie classification 1 and 2], I am more willing to recommend release,” Dr. Wei said.

To look for lip tie, Dr. Wei everts the upper lip to see if the natural upper frenulum comes down and “wraps around” the alveolar ridge. “If it’s too thick, broad, and, specifically in children who have teeth, if the thick band is between the gap of both central incisors, it may be reasonable to consider releasing it only if it interferes with brushing teeth or causes pain. If not, especially in babies without teeth, there is not enough evidence to support release to ‘improve’ nursing,” Dr. Wei said.

The research on whether or not frenectomy is an effective treatment has yielded mixed results. One report found that there is a “small body of evidence that frenotomy may be associated with improvements in breastfeeding as reported by mothers, and potentially in nipple pain” (Pediatrics. 2015;135:e1458–1466). However, “with small, short term studies with inconsistent methodology, strength of the evidence is low to insufficient,” the authors concluded.