The goal of imaging is to establish the “new normal,” which is important for future comparison, Dr. Pitman said. She added that there is room for improvement in having more standardized imaging protocols during surveillance. “There are no good NCCN guidelines for surveillance and follow-up,” she said. “We need cost-effective surveillance imaging guidlines that take into account disease site and individual patient factors.” 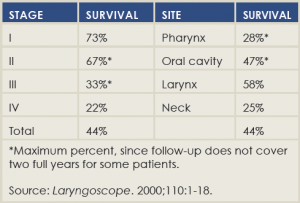 Recurrence at the Primary Site

Pierre Lavertu, MD, director of head and neck surgery and oncology at University Hospitals in Cleveland, said that two-thirds of patients with a primary recurrence are going to be salvageable. There are considerations that might run counter to surgery, however, including distant metastases, whether or not the disease is considered resectable, patients who are medically unfit for surgery, or those who simply prefer not to undergo surgery.

Surgery comes with complications, which are encountered in 23% to 64% of procedures, said Dr. Lavertu.

He mentioned a 2000 paper, published in The Laryngoscope and still considered an important salvage surgery study, that found that median disease-free survival correlated strongly with recurrent stage but weakly with the site of recurrence, and didn’t correlate at all with time to pre-salvage recurrence (Laryngoscope. 2000;110[3 Pt 2 Suppl 93]:1-18) (See “Two Year Disease-Free Survival After Salvage Surgery,”).

In a study of his own of 73 patients seen consecutively over a six-year period, Dr. Lavertu found that five-year disease-free survival was 41.6% and overall five-year survival was 51.6%. “Surgery is definitely the best option if we have tumor recurrence,” he said. “It’s not possible in all patients. The extent of surgery is according to the T stage, with the exception of the larynx, where most people end up with a laryngectomy.” He added, “We have to expect and be ready for complications and be ready to minimize these complications with the use of reconstruction.”

Patients with no prior surgery or recurrence have the most favorable outlook when it comes to salvage surgery with regional recurrence, followed by those with no surgery but radiation alone and then those who’ve had surgery but no radiation, said Dennis Kraus, MD, director of the center for head and neck oncology within the New York Head and Neck Institute and the North Shore-LIJ Cancer Institute in the North Shore-LIJ Health System in New York City. “Unfortunately, the group that represents the majority of patients, that at least I see in my practice, are patients who had a neck dissection, they’ve been irradiated, and they’ve recurred in the neck,” he said.