Ed. Note: After receiving hundreds of waiver requests, on March 30, the U.S. Centers for Medicare & Medicaid Services (CMS) temporarily suspended several of the rules for telehealth services, allowing for more than 80 additional services to be furnished via telehealth through interactive apps with audio and video capabilities or audio phones only. The waivers include emergency department visits, initial nursing facility and discharge visits, remote patient monitoring services, home visits, and therapy services for both new and established patients. In addition, CMS is allowing physicians to supervise clinical staff using virtual technologies when appropriate, instead of requiring in-person presence.

However, these changes are temporary and apply only for the duration of the national emergency declaration, and individual state regulations may still be in place. Check with your state medical board for up-to-date information.

Telemedicine has been around for more than 40 years. It started with physician consultations over the telephone and, due to advances in technology, has expanded significantly in how it is used by collaborating physicians and across practice areas to provide various types of treatment. According to the American Hospital Association, approximately 80% of hospitals use telehealth services in some capacity to reach patients. This number has undoubtedly increased since a national emergency regarding the coronavirus pandemic was declared, effective March 11.

Recent changes in state and federal laws have made telemedicine services more likely to be covered and reimbursed by insurance companies, benefitting both providers and patients. Now more than ever, patients have the opportunity to receive quick, affordable treatment in virtually any location. However, physicians should be aware that telemedicine coverage and reimbursement varies significantly by state.

Recent reforms have expanded the access and use of telemedicine, but the legal and regulatory framework has many layers and can create compliance hurdles.

Telemedicine is the remote diagnosis and treatment of patients provided through the use of telecommunications technology. The most common communication channels for telemedicine include: 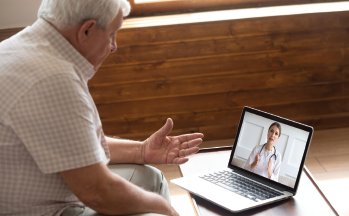 Telemedicine is governed primarily by state laws and regulations, with layers of federal law regarding patient privacy under the Health Insurance Portability and Accountability Act (HIPAA), restrictions on the teleprescribing of controlled substances under the purview of the U.S. Drug Enforcement Administration (DEA), and service location limits under the Centers for Medicare & Medicaid Services (CMS).

According to the American Telemedicine Association (ATA), 41 states have passed laws aimed at improving coverage and reimbursement of telehealth services since 2017. Thirty states have adopted the Federation of State Medical Boards’ Interstate Medical Licensure Compact, which allows for expedited licensure in the participating states.

Alternatively, six states, including Maryland and Virginia, have adopted laws for neighboring state reciprocity, and nine other states (Alabama, Louisiana, Minnesota, Nevada, New Mexico, Ohio, Oregon, Tennessee, and Texas) have created special telemedicine certificates that can be issued to out-of-state providers. Upon issuance, this certificate enables a provider to engage in telemedicine in accordance with the certificate’s parameters.

An additional consideration is whether a state has a corporate practice of medicine prohibition, which generally prohibits corporations from practicing medicine or business entities from employing physicians to provide medical services. For example, in California, any business or management decisions that result in control over a physician’s decision making must be made by a licensed California physician and not by an unlicensed person or entity.

Standard of care and prescribing—The AMA recommends that a patient-physician relationship be clearly established before the provision of any telemedicine services to the patient, including teleprescribing; however, each state has different requirements.

Knowing when a physician-patient relationship forms is not only important; it’s vital to avoid adverse treatment consequences and, ultimately, malpractice actions. Some states require initial face-to-face encounters prior to the commencement of telemedicine services, while other states permit a consultation with another physician who has an ongoing relationship with the same patient.

Regarding teleprescribing, certain states require a physical exam in person prior to authorizing prescribing, while others allow a telehealth exam before prescribing can occur.