SAN DIEGO—Widespread publicity about surgeons being involved in more than one surgery at once, touched off by a Boston Globe investigation late last year, has prompted Congressional scrutiny and caused the surgical field to closely examine whether or not the practice is carried out properly and leads to favorable outcomes. Panelists at this year’s Annual Meeting of the American Academy of Otolaryngology shared their own experiences and discussed how to avoid both medical errors and ethical lapses.

Brian Nussenbaum, MD, chief of head and neck surgical oncology and vice chair for clinical affairs at Washington University in St. Louis, Mo., said the topic ties together several issues that can sometimes be hard to balance. “Overlapping surgeries stand at the crossroads of ethics and informed consent, patient safety, surgical education, effectiveness of care, efficiency of care, and timeliness of care,” he said.

His hospital, Barnes-Jewish in St. Louis, Mo., was one of the centers asked to respond to a request for records on overlapping surgeries from U.S. Senator Orrin Hatch of Utah. The institution’s records showed that, over a 15-month period, 6% of all otolaryngology surgeries overlapped, and six of the seven surgeons for whom more than 6% of surgeries overlapped were head and neck surgeons.

In June, Dr. Nussenbaum said, Barnes-Jewish adopted a policy stating that overlapping surgery requires documenting a conversation with the patient in advance, that all critical parts of a surgery have to be completed before the surgeon moves on to another one, and that any emergency or extenuating situation resulting in unplanned overlapping surgery must be discussed with the patient afterward. 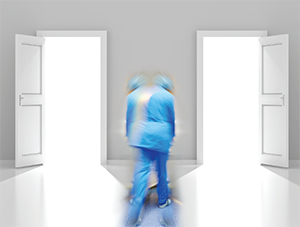 David Cognetti, MD, associate professor of otolaryngology-head and neck surgery and co-director of the Jefferson Center for Head and Neck Surgery at Thomas Jefferson University in Philadelphia, presented the results of an AAO survey of its members that showed that 60% of the 907 surgeons who responded said that “multiple-room surgeries,” as the survey described them, occurred at their centers. But 40% said they didn’t know if their center had a policy covering the rules for the practice.